Address by the New President of the EBU, Rodolfo Cattani

Following his election as new EBU President, Rodolfo Cattani made his inaugural speech to the General Assembly.

The photo shows newly elected President Rodolfo Cattani on stage during the proceedings. 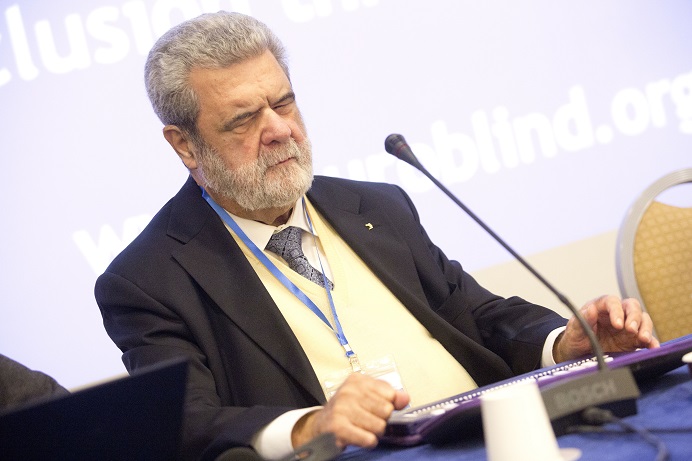 He first thanked Wolfgang Angermann for his contribution to EBU.

Rodolfo Cattani then extended thanks to the President of the Italian Union of the Blind and Partially Sighted who was responsible for his nomination as President. Rodolfo Cattani repeated the motto of the conference: leaving no one behind. A strong and united disability movement was required, which needed a demographic and cohesive Europe. As a consequence of the economic crisis, poverty and social exclusion were growing in Europe.

One in four Europeans were at risk of poverty of social exclusion. The divide between poor and rich people was widening within and between European countries. Xenophobic responses based on a feeling of insecurity among the population were growing. The current political climate in some countries had created the conditions for the resurrection of anti-Semitism and increasing islamophobia. A radical paradigm shift was required towards a sustainable development strategy, which would stop austerity and back public and social investment, putting people before markets.

For centuries persons with disabilities had been segregated, humiliated and discriminated against, and only in recent years had their rights been slowly recognised. Therefore, every ideology built on the populist principle ‘us versus them’ should be feared, and social divide was worrying, be it national, ethnic or religious.

Rodolfo Cattani was convinced that diversity was a value, not a threat, and believed in the motto ‘united in diversity’. The efforts of institutions that reinforced attitudes of inclusiveness, solidarity and non-discrimination were supported.

Rodolfo Cattani stated that the world was in a period of rapid and unpredictable change. The onset of the economic crisis in 2008 put the European project under increasing pressure, which had created a pattern of continuously escalating austerity measures across Europe. As a result, the integration had been almost completely stopped. There had been serious human rights violations affecting the daily lives of persons with disabilities. Governments continued to maintain systems that were in conflict with the UN Convention.

It was necessary and urgent to strengthen EBU and its member organisations, improve governance and working processes. Under-represented groups must achieve more representation and there should be more cohesion among members, as well as more EBU visibility at the grass roots level.

In conclusion, Rodolfo Cattani stated that there was much work to do. EBU was strong and had many forces at its disposal, and the future was positive, because the Members were strong and wanted to fight for solutions. Rodolfo Cattani would support the activity of EBU, and hoped to be strong and convincing enough.