There had been 217 envelopes in the box for the election to the ExCo with a total of 539 votes cast. The members elected to the WBU ExCo: Wolfgang Angermann with 147 votes; Rodrigo Santos with 136 votes and Thorkild Olesen with 124 votes. Sinan Tafaj with 89 votes and Emin Demirci with 43 votes had not been elected.

There had been 206 envelopes in the box for the election to the Nominations Committee with 536 votes cast. There had been two envelopes with invalid slips amounting to 10 invalid votes, leaving 526 valid votes. The members elected to the Nominations Committee were: Karolina Doltar with 164 votes; Marjakaisa Matthíasson with 147 votes and Monica Lövi with 132 votes. Ramunė Balčikonienė was not elected with 83 votes.

In addition to the above, the President proposed the conferment of an Honorary Life Membership to Geert Joosten who had dedicated his time and energy to the Liaising Commission and to blind and partially sighted people in the Netherlands through his presidency of his organisation.

The following photo shows a female delegate raising her hand with a voting slip, showing readiness to vote, as an assistant approaches with a ballot box. 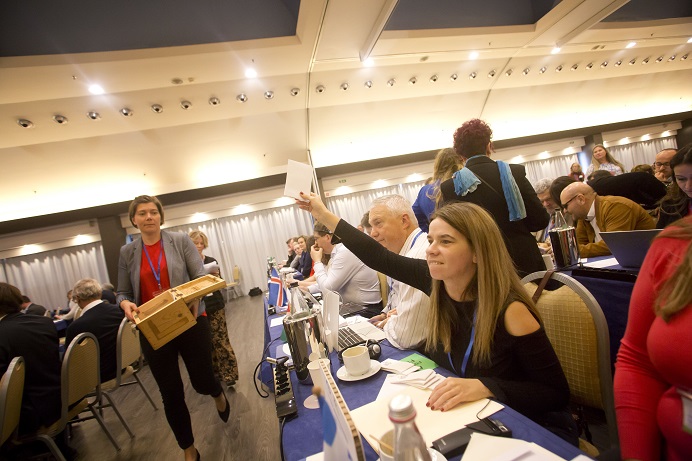