Overview of the General Assembly

The 11th EBU General assembly was held in Rome, Italy from 28-30 October 2019. The Assembly was hosted by the Italian Union of the Blind and Partially Sighted (UICI) and EBU would like to sincerely thank them for both their organisational skills and their warm sense of hospitality. The venue was the Mercure Roma West Hotel just outside Rome, which was spacious as a conference venue and also offered plenty of opportunities for delegates to socialize in the evenings. Special thanks should be offered to all the team from UICI who worked tremendously hard to make this event a resounding success. Financial support was also offered by Google, and EBU offers its gratitude to them for their generosity. 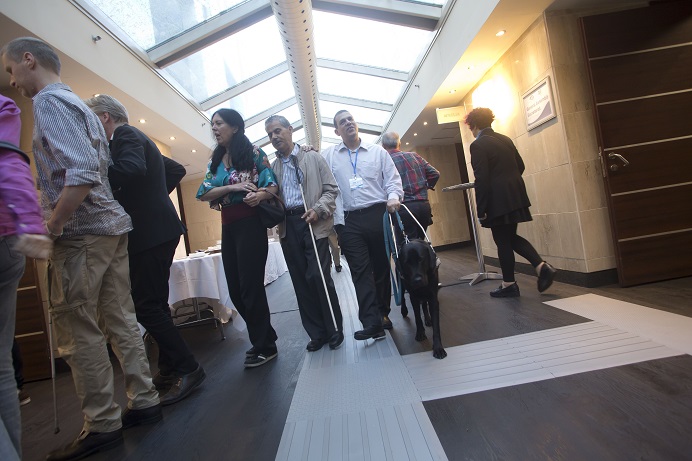 The photo shows sighted and visually impaired delegates navigating the hotel corridors with guide dogs or white canes and the guidance strips on the floor.

Some statistics concerning participation: 34 out of the EBU’s 41 national members were represented, the countries not represented were Armenia, Belarus, Belgium, Kazakhstan, Luxembourg, Ukraine and United Kingdom.

The theme of this Assembly was ‘Leaving no one behind: EBU driving full inclusion through the SDGs'. A number of key documents were presented and debated on the first day, including the Board report 2015-2019 and draft Strategic Orientation 2020-2023, the Treasurer’s report, and amendments to the constitution of EBU.

During the assembly, keynote speeches were made on the following Sustainable Development Goal topics; Good Health and Well-Being, Industry, Innovation and Infrastructure, Decent Work and Economic Growth, Gender Equality, Quality Education, Peace, Justice and Strong Institutions, and Partnerships for the Goals.

Key speakers included representatives of three pharmaceutical or medical technology companies, Santhera Pharmaceuticals, MedTech Europe, and Vanda Pharmaceuticals. Gender equality was also high on the agenda with important and timely presentations on the EBU GEAR project and subsequent Malmo declaration, by Karin HJALMARSON, Swedish Association of the Visually Impaired, and Stefanie STEINBAUER, Officer for International Cooperation, Austrian Federation of the Blind, and on the impact of the #Metoo movement by Unn LJONER HAGEN, President, Norwegian Association of the Blind and Partially Sighted.

Other key elements of EBU’s work were also discussed, including accessible voting and braille teaching and literacy. Google, who generously sponsored the event, spoke about Google’s Approach to Accessibility.

Outside of the SDGs, brief sessions were also held on the possible relocation of the EBU central office, and a team talk was given by members of the central office staff, during which Executive Director Mokrane Boussaïd announced he would be retiring in spring 2020.

A special Gala dinner held on the evening of the 29th of October and included the presentation of the Vision for Equality award by EBU President Wolfgang Angermann (more on that below). It was a convivial and relaxed evening which all present seemed to enjoy.

Also, as part of the proceedings, the EBU Board took pleasure and honour in bestowing the Arne HUSVEG award on the former Second Vice President Tommaso Daniele and the former Secretary General Birgitta Blokland.