FEEDBACK FROM THE EBU GEAR CONFERENCE 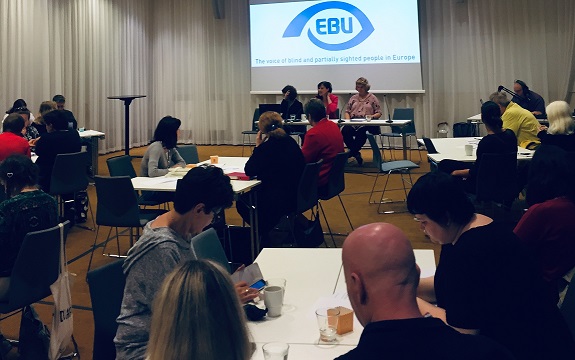 Picture shows participants at the gear conference.
Description; a diverse group of participants are seated around tables in the conference hall, in the background 3 of the organisers are sat at a speakers table, the EBU logo is visible on a screen behind them.

The GEAR conference took place in Malmö, in June, coordinated and hosted by the Swedish Association of the Visually Impaired (SRF), with the financial support of the European Blind Union and the European Commission as part of the GEAR (Gender Equality Awareness-Raising) project, a three-year long initiative which aims to increase awareness of gender equality issues across the EBU region. Its purpose was to share means to empower blind and partially sighted women within our organisation and to encourage all participants to put Gender Equality higher on their national agendas.

With 50 participants (including 20% of men) from 15 countries, a wide range of lectures, discussions and working groups the conference was a vibrant and successful meeting, enabling national leaders to improve the Gender Equality work in EBU, as well as for blind and partially sighted women to gather useful examples, tools, practices and tactics for implementation in their respective countries.

The conference started on Friday 14 June and was streamed live on radio.srf.nu, the national Swedish radio. Participants were greeted by Maria THORSTENSSON, Second Vice-President, Swedish Association of the Visually Impaired (SRF) and Barbara MARTÍN MUÑOZ, EBU Second Vice-President, who launched the conference with the catchphrase: “EBU changes to a higher GEAR in the gender equality battle.”

After a short introduction, participants took part in an ice-breaking exercise based on the meaning of their first name! Some dark and funny secrets were thus disclosed and induced lively conversations.

In the first round table, “Cherish the past – embrace the future”, moderated by Maria KYRIACOU, EBU Secretary General, we heard captivating testimonies by outstanding women who paved the way for gender equality actions within EBU and beyond. Kicki NORDSTROM, Former President, World Blind Union, Birgitta BLOKLAND, Founder EBU Women’s Network and Bárbara MARTÍN MUÑOZ each told tales illustrating many years of efforts in getting women organised to create a strong dynamic against double discrimination. In a nutshell, a few year after its inception, only a handful of women were represented within EBU, particularly at the General Assemblies and in decision-making bodies, as a result, a Women Commission was created and in 1999 a Women’s Network was set up “to exchange information, experience, ideas. To help each other in answering questions concerning our work in the Equality and Diversity field, to find solutions together, to cooperate.” The GEAR Conference was also a way to celebrate the 20th anniversary of this network. Over the last two decades, great progress has been experienced within our organisation and society at large, yet gender representation remains unbalanced (with only 4 women out of 13 members of the EBU board) and double discrimination, based on visual impairment and gender, persists.

Later that afternoon, Karin HJALMARSON, Advocacy Officer Gender Equality for SRF and Stefanie STEINBAUER, Officer for International Cooperation, Austrian Federation of the Blind and Partially Sighted presented the detailed results of the GEAR Report. Unsurprisingly, its main findings stated that visually impaired women continue to be underrepresented in national boards and positions of power, that they face higher discrimination in all walks of society and systematically get lesser valuable jobs.

Bouncing from this report, a discussion followed on “How can EBU tackle the issue of gender equality for visually impaired women among its members?” Concrete examples were given by participants, including subcommittees in Nordic countries, affirmative actions encouraging and choosing female leaders through networks, involving and educating men, securing quotas and balanced nominations, making sure that the obligations of the constitution are enforced.

Saturday 15 June, started with presentations led by Unn LJØNER HAGEN, President, Norwegian Association of the Blind and Partially Sighted, and her colleagues. They first presented findings on the topic “Gender discrimination: Are visually impaired women and men discriminated differently than other women and men?”

A Norwegian study shows that generally the visually impaired population has 40% employment, with more women in precarious situations, sometimes without the chance of education or vocational training. Less visually impaired women have higher education.

Besides, a study on sexual assault stated that “the risk of experiencing sexual assault appears to be higher in women with visual impairment than in the general population. Preventative measures as well as psychological care for those who have been exposed are needed”

The latter study can be found here: https://bit.ly/2KH2S3I

On this sensitive topic, the short film “In Plain Sight” by Magnus Berggren was shown to illustrate the extreme vulnerability blind and partially sighted women can experience in their personal life.

The presentation then moved on to discuss whether the global #MeToo campaign had contributed to organisational changes within our associations. The conclusion was that the campaign had indeed been relevant for the disability movement as for other associations. All EBU organisations are thus encouraged to establish internal mechanisms to safeguard women against sexual and other types of harassment. EBU and its member organisations must address violence against women in a transparent manner and engage in policy debates at local, national and European level.

On the Saturday afternoon the participants split into two Working Groups. The next day each group made a short presentation of its conclusions

Group 1, led by Tiina NUMMI-SÖDERGREN, Project manager of Equally Unique Academy (Sweden), focused on the topic “Leave no one behind. How to make it happen, how to impact and how to link the Sustainable Development Goals (SDGs) to the rights in CRPD?” The main advice when implementing SDGs was to make sure there is a disability perspective and links to the rights in CRPD, that provides sustainability. SDGs should be used to strengthen the advocacy for disability rights within EBU and nationally. Obviously, as the subject stated no one should be left behind in this effort.

Group 2, led by Karin BLOMSTRAND, Operations Manager of Gender Equality Skåne (Sweden), worked on “Training for future empowerment trainers” and notably concluded on the importance of intersectionality and concrete actions within each organisation, involving allies, i.e. men who should be part of the training process.

Following these workshops a wider discussion encouraged everyone to share constructive examples in female empowerment and Gender Equality actions from their own countries.

We also learned about medical tactile examination in Austria, a new job solely for visually impaired women, or how to use their extraordinary tactile sense to spot lumps in the female breast and detect early cancer in a non-intrusive way.

Other countries reported on the successful regulation in speaking times to enable women be heard as much as men.

Many types of affirmative action have been implemented to promote better employment for women with disabilities. This includes financial incentives and extra efforts until the balance is reached.

To strengthen these constructive examples, EBU’s documentary “The Road to the Top” was projected, showing key role models within the organisation, women who have overcome all obstacles to rise to a successful position.

After three intense and stimulating days, The GEAR Conference 2019 came to an end with a roll call on expectations towards EBU and concrete steps within member organisations.

The EBU Malmö Declaration was also drafted as a reference text for the EBU Board and all members to help implement concrete measure towards Gender Equality with the European Blind Union and its ramifications.

The way forward seems to lie in perceiving both genders as equal and to empower women’s aspirations. Integrating gender equality adds value to visually impaired persons’ organisations. In short, “Get involved and create equal opportunities for women!”

Observer on behalf of the EBU OFFICE

(The results and conclusions of the conference can be found in the 2019 Malmö Declaration. Blind and partially sighted women who are interested in joining the EBU women´s network can contact ebusecretariat@euroblind.org and our secretary general Maria Kyriacou at ebusg@euroblind.org)