On September 20th 2021, Romain Ferretti, EBU Project Manager, and I participated in a pilot study on connected and autonomous buses in Luxembourg. The study was carried out by the project partner EBUS of the PAsCAL research project, co-funded by the European Commission. There were 6 blind and partially sighted participants from DBSV (Germany), including the chairperson of the commission for environment and mobility, Eberhard Tölke as well as some personal assistants.

The pilot study concentrated on the acceptance of autonomous busses by blind and partially sighted persons. It was part of a very broad study on driver assistance features up to completely autonomous driving cars and busses. For EBU it is very important to participate in this kind of projects as we can influence the development of this future technology and point out the needs of blind and partially sighted persons. 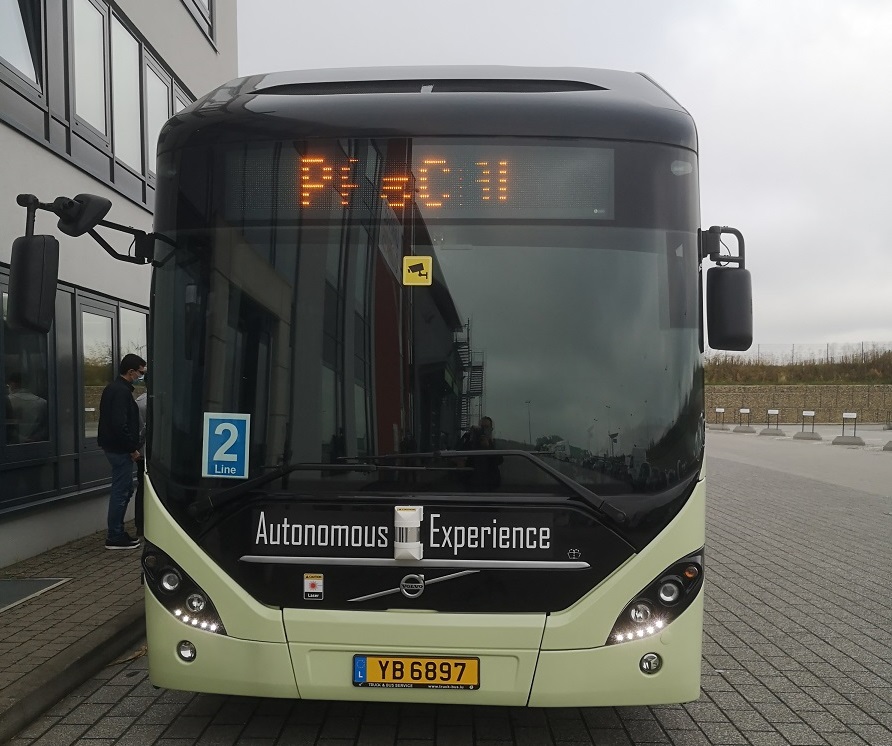 A picture showing the autonomous bus with ‘Pascal’ displayed as a destination. (Photo Romain Ferretti)

During the Luxembourg pilot study the participants were asked to take part in two bus rides. The first one with a conventional diesel bus and the second one with a Volvo Hybrid 7800 Bus, that was programmed to work only in the electric mode during the pilot. The bus was modified, so that the participants could not have any contact with the driver by an additional wall in the bus which carried a screen giving visual information on the ride. Additionally there was acoustic information about the regular bus stops, additional stops that were not scheduled, a high speed section of the trip, as well as door-opening and -closing. For sighted participants of the study there was additionally a tablet computer placed on the window left of the door with four functions to be initiated by touch. 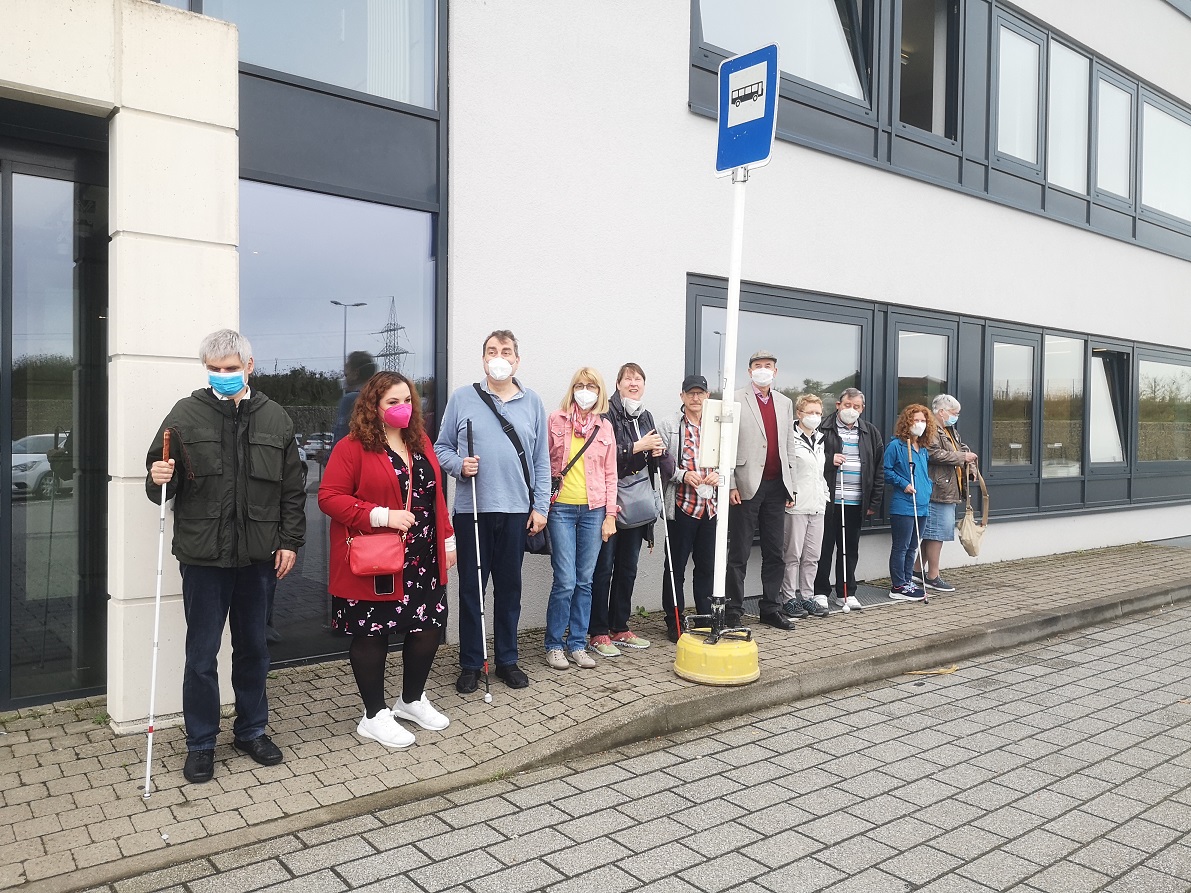 A mixed group of participants, some with white canes, waiting at a bus stop. (Photo Romain Ferretti)

After the two rides the participants were asked to answer a questionnaire of 37 items to describe the experiences and attitudes with regard to autonomous and connected cars and busses. Then there was a focus group discussion which concentrated on the emotional experiences of the participants. It turned out that all participants felt safe during the ride and would not have any reason not to trust in an autonomous system that functions like that. But the participants had a lot of technical recommendations to improve accessibility and usability of future autonomous busses. Most of those we already had collected by EBU’s Road Safety and Access to Transport network independently, but from a theoretical point of view. 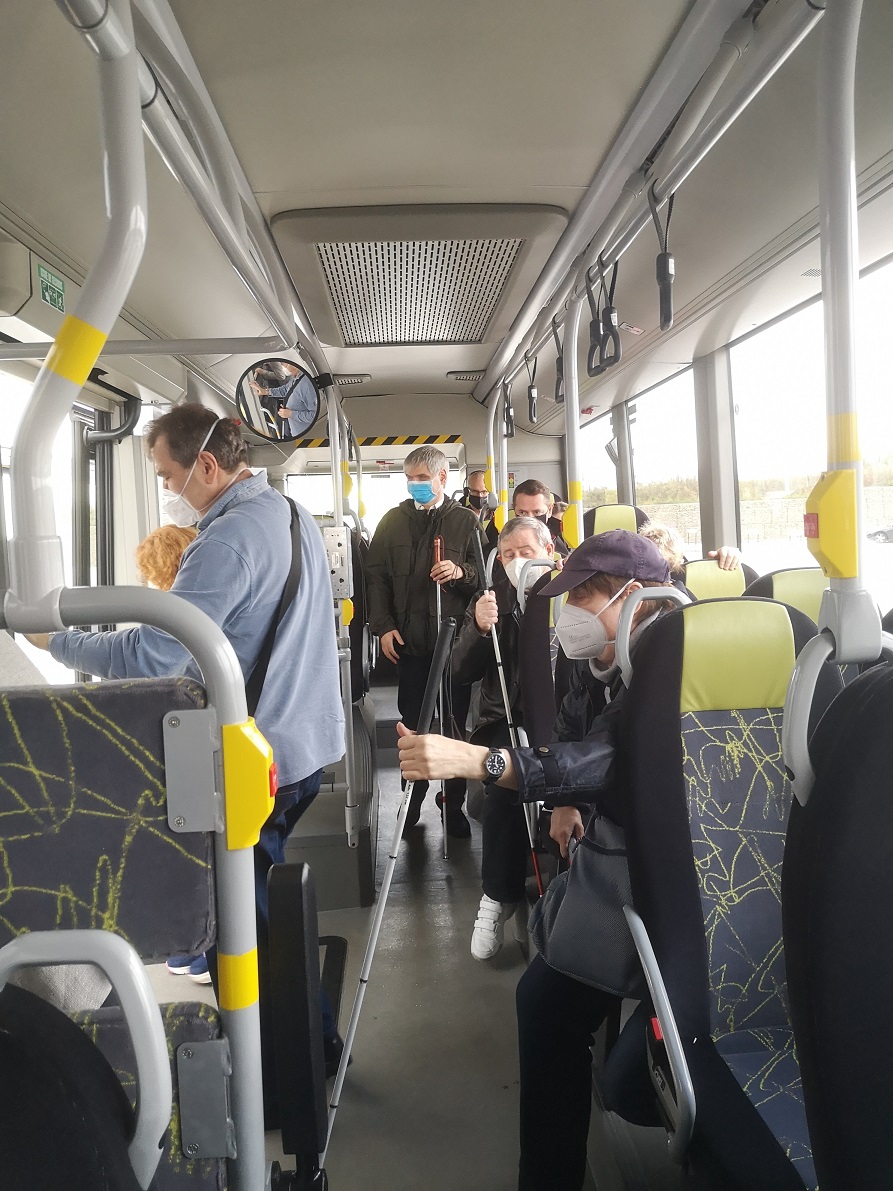 A mixed group of participants, some with white canes, travelling on the bus (Photo Romain Ferretti)

First and most important for the participants was the possibility to get into contact with an operator outside the bus, located in some central or mobile safety unit, who could deliver assistance if needed. Above that, social control by video and speech and visual contact with a natural person outside the bus was regarded as essential in case of emergency and to prevent vandalism and violence. The participants also discussed, that it should be possible to use a future autonomous bus by a smartphone app or beacon, which is standardized at least nationally, but preferably all over Europe. Otherwise one would have to download and learn several different systems, which would make mistakes and stress more likely. In addition also for blind and partially sighted persons it should be possible to use those systems without an additional technical aid, as far as this is technically possible. Another feature could be the opportunity to ask for human assistance, if you are not able to use the system because of an impairment.

Also discussed were the design for all and the two senses principle as well as the necessity of braille instruction at buttons. And – of course – it was emphasized that there may not be any touch buttons in public transport at all but only press buttons to prevent false functions.

All the results will be documented and published in the PAsCAL project report as well as several scientific articles starting at the beginning of 2022 with the publication of the results of a survey on connected and autonomous cars, in which 802 blind and partially sighted persons from 8 European countries participated.